Bioni Samp – Journey To The Centre Of The Beehive (BEEFREQMED-001)

5 min, 2012
First in a series of Bee Frequency Meditation Sessions. Binaural recording taken from inside a real beehive, mixed with hive synthesiser and other home made instruments.

Hive Synthesis attempts to create a symbiotic frequency relationship, like pollination and nectar exchanges, beekeeper and bees. I was inspired to learn more about bee frequencies and create a work that raised awareness about bees and their increasingly fragile ecology system.

The idea is to create an audio journey which explores
the sounds and frequencies inside the honey bee’s home the beehive.

In each honey bee colony there are three types of bee. The drone,
worker and queen bees, each of these have their own individual
frequencies in the ranges of; low – 200 Hz or less, mid – 200-400 Hz
and high – 400+ Hz, just like the earth has its own special frequency
of approximately 7 -9 Hz.

As a electronic music producer and seasonal beekeeper. I was inspired
to learn more about bee frequencies and make a creative work that
incorporated these bee frequencies in the hope of raising awareness
about bees and their increasingly fragile ecology system. There are
many interesting facts about bee frequencies. For example… the same
high frequencies the Queen creates, are also used in Genetic Engineering
to splice DNA together.

Listening to honey. Each beehive colony sounds different and each type of honey sounds different too, depending on the water content (usually around 17 percent in my beehive’s honey) and the viscocity of the honey. 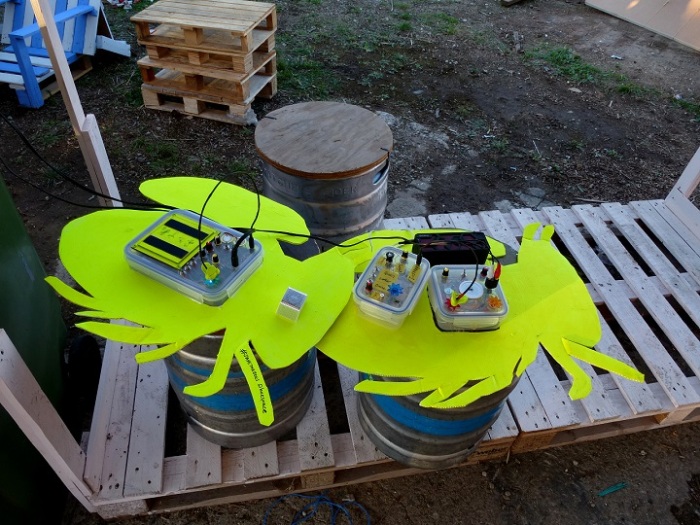