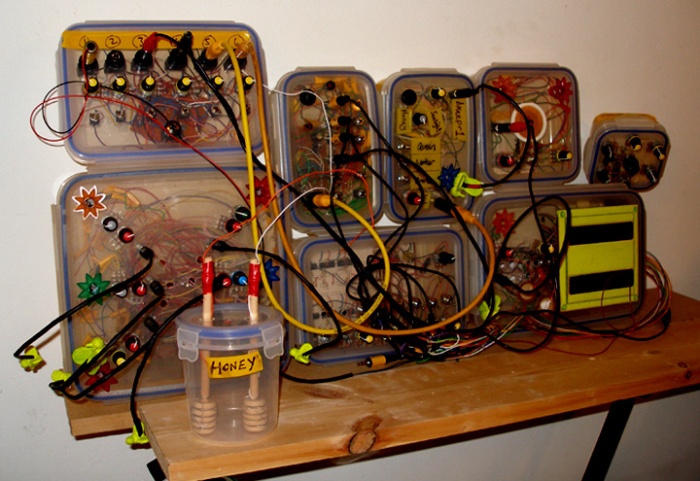 Full Hive Synthesiser by Bioni Samp, inspired by bee frequencies and the electrical resistance of honey…

…The Hive Synthesiser, which creates sounds from honey, or how I built my own basic modular synthesiser for £17 quid… More on how to build a similar synthesiser here 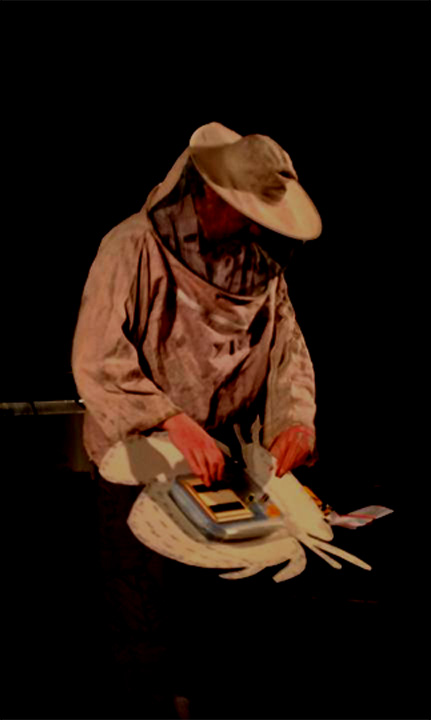 TheBee is a new musical instrument I have been testing / modifying / hacking / sculpting its case and overall aesthetic design, as part of a research project, at Queen Mary University of London. Lasting almost a year. Starting with testing an early prototype and then a fully functioning instrument called the D-Box. The ‘Original instrument hardware is by Victor Zappi and Andrew McPherson, Centre for Digital Music, Queen Mary University of London’.

The great thing about this research project is that I have been given the D-Box basic instrument and a load of capacitors and resistors etc and completely free reign to change / modify / hack / load my own samples on to it etc. As well as change the look of the instrument to something slightly more out of the box, taking a more sculptured approach to design a casing that would suit my performance needs, this is a work in progress. 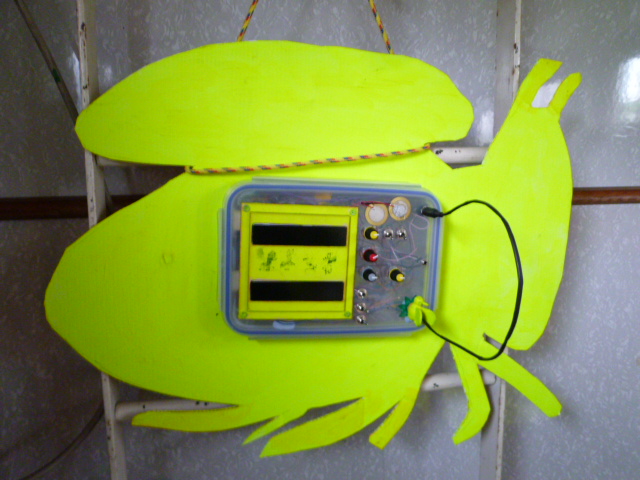 It uses some clever programming software called Bela by Victor Zappi and Andrew McPherson to give low latency playback of samples (my bee hive samples and bee synth recordings are loaded on to it). Using ‘partial analysis files’ it breaks the sounds down into tiny segments. Partial analysis decomposes audio files into a set of sines, which change volume and frequency over time. When played altogether [according to Fourier Series theory], they highly resemble the original file. The Bela software is an open-source ultra-low-latency embedded audio platform with high performance audio and sensor processing. For instrument makers, hackers, developers.

The touch sensors on the original instrument and the extra modifiers I have added, to change the playback sample, it’s speed and the sensitivity of the sensors. These are all plugged into a Beaglebone Black mini computer (similar to a Raspberry Pi). More on the D-Box here. After a name change and Kickstarter funding success the platform is now called Bela and is described as ‘an open-source embedded platform for real-time, ultra-low-latency audio and sensor processing on the BeagleBone Black’.

When I recently performed at the D-Box Concert, at QMU, along with 11 other musicians and artists, I chose to ‘play’ my; ‘TheBee’ (formerly The D-Box)  with ‘The Owl’ FX pedal that I am also currently testing out. ‘The Owl’ is a programmable FX pedal for musicians and geeks who like to program their own FX in Pure Data. ‘The OWL is also  open source, and programmable effects pedal made for guitarists, musicians, hackers and programmers alike. Users can program their own effects in C++ or PD, or download ready-made patches from their growing online patch library’. hoxtonowl.com 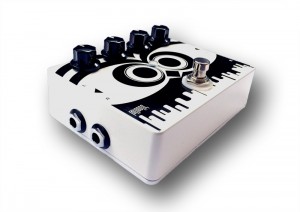 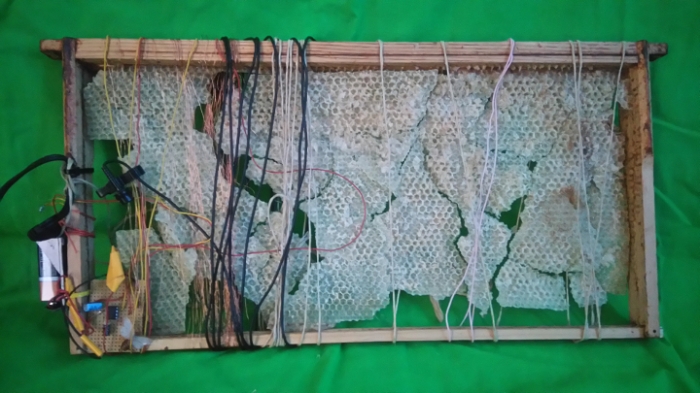 The Binaural Beeframe EMF Detector (c) Bioni Samp 2012 was used for the video and audio recording….

A remediation of a rare Super 8 film, A Journey to Avebury (1971), by acclaimed English film director Derek Jarman.

Avebury is a Neolithic henge monument containing three stone circles, located around the village of Avebury in Wiltshire, UK. Avebury contains the largest stone circle in Europe and is one  of  the best known prehistoric sites in Britain. The ‘Journey To Avebury’ part of the title comes from a rare Super 8 film, A Journey to Avebury (1971), by the acclaimed English film director Derek Jarman (1942-1994), documenting a summer visit to the stone circles in the early 1970s. Electronic Journey To Avebury retreads this path forty years later, in winter. Through processed video and sonification of electromagnetic fields, it reveals a hidden message among the stones.

This is how the artist described the process involved in producing this unusual remediated image and sound piece:

To make the video and audio for ‘Electronic Journey To Avebury’, I went to Avebury stone circles with my Binaural Beeframe EMF Detector (2012), Hive Tool Resonance Detector (2012) and video camera. I was hoping to hear something interesting. I was wondering if the stones were perhaps magnetic or had ley-lines between them which could be followed. Readings of electromagnetic radiation and transmitted resonance were recorded from and around the stones, forming part of the soundtrack. The soundtrack was then mixed with my Hive Synthesiser and other home-made instruments. My Hive Synthesiser attempts to create a symbiotic frequency relationship, like those between pollination and nectar exchanges, or between beekeeper and bees.

In each honey bee colony there are three types of bee: drone, worker and queen bees. Each of these have their own individual frequencies in the following ranges: low – 200 Hz or less, mid – 200-400 Hz, and high – 400+ Hz, just like the earth has its own special frequency of approximately 9 Hz. Bee frequencies are created by modular oscillators sensing light. Electronic bees are carefully guided over the Hive Synthesiser interface to electronic flowers. Numerology of bees and beehive habitat patterns, hive logs and cycles are used as circuit starting points. Known for its calming effect upon the beehive colony, The Electronic Beesmoker acts as a modified breath controller. 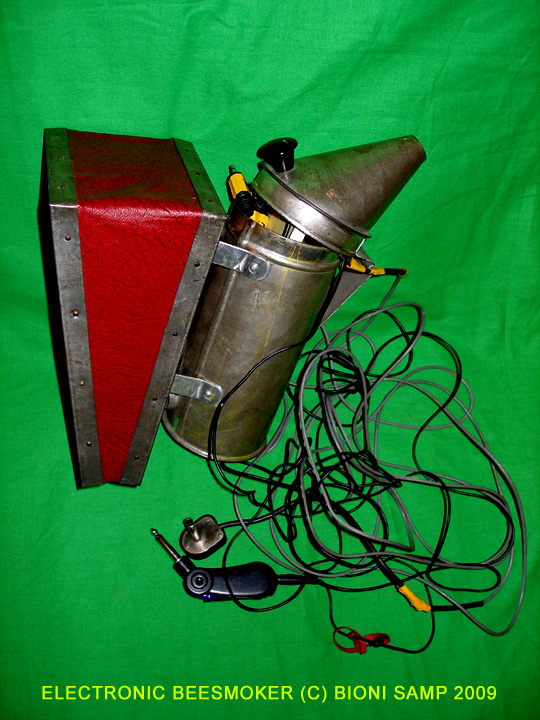 The aim of this project was to learn more about bee frequencies and to create a work that would raise awareness about bees and their increasingly fragile ecosystem.

Bioni Samp – “Electronic Journey To Avebury” has recently been selected for the http://photomediationsmachine.net a curated online space at Goldsmiths, University of London, UK.

Other videos by Bioni Samp